Good morning chainsaw chicks and psychogardenerbillies. Teabag here.
I discovered this record label over my morning coffee with coconut oil. The coconut oil is very good to stimulate ones first bowel movement of the day by-the-way. Anyway, I am not posting in order to tell you about my bowel movements. This record label specialises in surf, instrumental and garage rock. I discovered them initially because PGP favourite, The Barbarellatones appeared on a compilation there called “Radical Waves.”
I am just about to go and order that one from Raucous Records and noticed that there is also a band there called the Twang-O-Matics from here in Norway! I’ll have to go and research that right away. Robbie from The Barbarellatones has actually sent PGP lots of new music so I’ll be spinning them in next weeks show. Anyway, have a great Sunday morning, and here are some links: 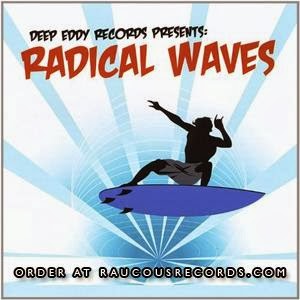