The Meteors, a brief history.

This is not my article. It was written by Matteo Pogan, but it’s relatively well written, researched and does what it sets out to do: a brief history of The Meteors. 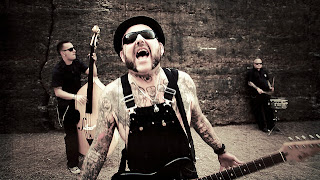 The band The Meteors are one of the founder of psychobilly and still thrive today. The Meteors motto is that they are the only true pure psychobilly bands. So how did this band that’s still around after almost four decades first come to be? It was around 1975 when P Paul Fenech and Nigel Lewis started playing rockabilly music together. Their original band was named Raw Deal. Then in August 1980, as a reaction against the soft rockabilly, The Meteors formed. Joining the two founding members was Mark Robertson. Roberston began playing drums at the age of 14 after he saw Santana’s drummer Mike Shrieve playing “Soul Sacrifice”. Early on his favorite drummer was John Bonham of Zeppelin which he saw play live in 1974. He then says that he had a “punk coversion”, and ended up throwing out his entire hippy record collection. His new heros after this conversion were, Marky Ramone and Rat Scabies. Some of his favorite bands included punk pioneers, New York Dolls and The Stooges. He was a drummer for a punk band called “The Models”, which he quit to join Meteors.

When deciding on the name for the band, Fenech stated that he wanted, “something short, a simple name that people could remember.” The band name, The Meteors, was already used by an old rockabilly group in the 50s. Frenech has been quoted saying, “They all died in an airplane crash so we thought we would use their name.”

Early on they covered songs by Roy Orbison and Johnny Burnette, but
Fenech has described their music as a cross between rockabilly and early punk. It has been written that The Meteors played their first show during Rockabilly Night at The Sparrow Hawk in Edgware North London. But in an old interview drummer Roberston says their first gig was at a rock n roll gig called the Cavern, in Willesden located in North West London. The Cavern is where Brian Epstien first saw The Beatles play in 1961. Roberston went on to say, “The first time we played we got through 16 songs in 29 minutes, Ramones style.” Right from the beginning the band decided they wouldn’t just cater to one specific group of people. If you liked the Meteors then come enjoy the Meteors play live music, no matter what else you may be into. “We don’t play for rockablies, we don’t play for punks we play for anyone who wants to hear us.”

In June 1981 the band recorded the “Peel Sessions” with John Peel Day, one of Brtain’s most loved broadcasters. During that session were the first recordings of; Voodoo Rhythm, Love You To Death, Rockabilly Psychosis, My Daddy Is A Vampire, and Rockhouse. They were developing a loyal following that by this time were known as “the Crazies, or Zorchmen.” As with any style music, dancing is an important part of the development of the culture of that style. The Meteors fans invented their own dance style called “going mental.” This dance would later be renamed “wrecking,” which is a staple in the psychobilly music culture today.

March of 1981 they released the movie Meteor Madness. The story line is meant to be “light relief”, and involves the devil trying to create the perfect athlete, but instead creates The Meteors. It only took them two days to film the movie, and it contained the tracks, “Voodoo Rhythm”, “Maniac Rockers From Hell”, “My Daddy Is A Vampire” and “You Can’t Keep A Good Man Down”. None of the tracks made their first full-length album, In Heaven, which was released on August 1981 on Island Records. It would be the only album in which Fenech and Lewis worked together on. It has been said that after Lux and Ivy, of the Cramps, heard the song “The Room” the Meteors were picked for the slot for the Cramps ’81 UK tour.

In December on 1981 the band would began it’s first of many line up changes when Mark left to join a band called, “Theater of Hate.” In 1982 Niguel Lewis would leave the Meteors, and Mark would re-joined Nigel but this time as a member in the Escalators. The Meteors kept moving and continued it’s constant touring but would not release their next full-length album until 1983. With Mick White playing bass, added guitarists Russell Jones, and Steve “Ginger’ Meadham on drums The Meteors released their break through album “Wreckin Crew”.

Ironically, Fenech has been quoted as saying that he felt “Wreckin Crew” recordings were, “a mess and made too soft.” 1983 there would be another member change and Mick White would leave to form his own psychobilly act, the Guana Batz. Rick Ross would take his spot but only for a national tour. Ian “Spider” Cubitt then joined the band to record their next album “Stampede”, which was released in 1984. In 1985 the band got a new bass player Neville Hunt.
In 1986 the band released, “Teenagers From Outer Space’ which contained many of the songs recording in their original Peel Sessions from 1981. The last half of the 80’s The Meteors would go on to release an album every year;1986 Sewertime Blues,1987 Don’t Touch The Bang Bang Fruit,1988 Only The Meteors Are Pure Psychobilly,1988 The Mutant Monkey And The Surfers From Zorch, and 1989 Undead, Unfriendly And Unstoppable.

In 1991 it was time for Fenech to put to use what he learned while studying sound engineering and studio production first at Leicester University. The University is located in Leicestershire, a town located in east midland England. It is sourrounded by a many notable music venues where bands such as The Yardbirds and The Animals once played. He also attended, The Kingston Technical Institute which has a long history and opened in 1899. Their 1991 album “Madman Roll” was recorded by Fenech completely by himself. Today they have their own recording studio which they call “In Heaven”. In Heaven is a fully working pro studio used by other bands. Fenech feels he,”can truly put down my own ideas rather than working to a budget” I’m not watching the clock, seeing what it’s costing me.” As a result he feels this gives him more chances to express himself. In 2000 Wolfgang Hordemann joined on drums. In 2009, he still remains in the current line-up which includes Mark Burnett on bass. In 2009 they also released their 26 full lenght album Hell Train Rollin’. With the popularity of psychobilly still growing today the Meteors show no sign of slowing down anytime soon.